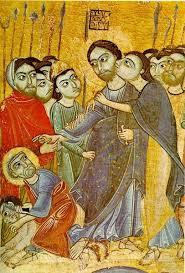 Prophets like Ezekiel acted as mouthpieces for God in his relationship with the Jewish people. He himself was even to be held to account for not issuing warnings to the wicked.

Sometimes it is necessary to speak out against wrong-doing, particularly where someone is being harmed. This would be true for example if a person abuses another for the colour of their skin, religious belief or sexual orientation. It would be especially important where the wrongdoer has influence. However, it is all too easy for communities to scapegoat those who appear to be offending them. In The Scarlet Letter by Nathaniel Hawthorne, Hester Prynne, who has borne a child out of wedlock, is humiliated in public by being forced to wear a scarlet letter A on her dress with an audience of Puritan spectators looking on. She has to continue wearing it for the rest of her life. Likewise, young unmarried women who became pregnant in Ireland were sent to the infamous Magdalene laundries, while no one pointed fingers at the unmarried fathers.

Our Lord was very gentle with sinners. It was the ones who ostracised others while parading their own righteousness with whom he was most impatient. He said: