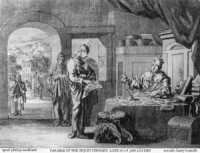 Today’s parable is very strange, because the steward is praised for his shrewdness in acting dishonestly. How could Jesus praise sinfulness? His audience would have consisted of pharisees as well as disciples. Luke inserts this story between that of the prodigal son and the rich man & Lazarus. In verses 14-16 we are told how much the Pharisees loved riches. They seemed to have been able to reconcile their greed with their strict observance of the Law. Jesus is trying to highlight the destructive lure of money in the three tales.

The steward in today’s account seems to have been incompetent but cunning. He reduced the debts owed to his master. It is probable that the master was a usurer, charging exorbitant interest to his fellow Jews, which was forbidden by Deuteronomy (Deut. 23:19). The debtors would have been extremely grateful to the steward for reducing the amount they owed. The rich man praised the steward for his acumen. Maybe he belatedly recognised a kindred spirit!

“The children of this world” are quick to use their resources to get what they want. Their goals are clear and they are prepared to pursue them energetically. Jesus suggests that perhaps the children of light could direct the same energy to obtaining the riches that do not perish. He had shown from his colourful narratives, a kaleidoscope of pitfalls which a love of money can bring. We can call to mind the parable of the sower, where thorns represent the cares, riches and pleasures of the world which stifle the spiritual progress of the would-be believer (Luke 8:14).