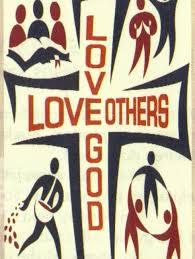 Throughout his ministry, Jesus was constantly harassed by both the Saducees and Pharisees. The Saducees did not believe in the resurrection and had previously posed a trick question (Matthew 22:23-29) which Jesus answered, effectively silencing them. The Pharisees who were in dispute with the Saducees then came in to test Jesus. It must have been deeply hurtful and disheartening for him to be challenged by people who were learned and versed in the scripture and law but were completely lacking in charity. They were unable to understand that to love God and neighbour is to be in compliance with the Law. Obeying regulations punctiliously can be relatively easy, bringing about a feeling of self satisfaction at having ticked all the boxes. Loving neighbour, however, can be hard. St Catherine of Sienna tended an old woman who was so badly affected by leprosy that the magistrates expelled her from the city. However the woman responded to Catherine’s care with continual bitter complaints and reproaches. Catherine nevertheless persisted in offering kindness and patience.

Jesus loved eternally by the Father and as man, in his Nazareth home by Mary and Joseph, gave all that He had on the cross, in obedience to the Father and in pure love for his brethren. He put into practice what he had preached in his short time on earth.