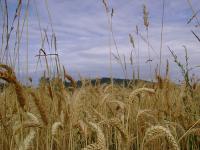 Darnel is a noxious weed, which in the early stages resembles wheat. When it ripens it turns black, in contrast with wheat which turns brown. The seeds are poisonous and if mixed with those of the wheat they could prove fatal. It was not unknown in biblical times for farmers to sow darnel in their neighbour’s crops.

There is a saying that God does not create rubbish; therefore the subjects of the devil must be those who have chosen to be his. However human beings do not have the ability to distinguish between good and bad people. We can recognise evil when we see it and condemn it but we cannot judge another person’s merit.

Gardeners find many weeds troublesome when they grow among their plants - speedwell, dandelions and buttercups, for example - yet these flowers all have their own beauty. In Thomas Hardy’s “Tess of the d'Ubervilles” the young, innocent girl Tess is raped by a young man. She confesses this to her husband Angel on their wedding night but he is unwilling to forgive her, even though she is blameless and he himself is not without fault. His wheat has become darnel. Angel’s unkindness and desertion lead to her downfall and ultimate execution. We do not improve people by treating them badly.

Jesus was always very gentle with sinners. The self-righteous scribes and pharisees who sat in judgement on the woman taken in adultery (John 8. 3-11) suddenly discovered the darnel in themselves when challenged by Jesus. He, on the other hand, who was entitled to be her judge, refused to condemn her.