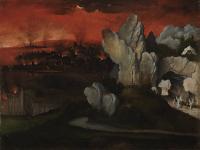 The destruction of Sodom and Gomorrah was seen by the Old Testament writer as a punishment for grave sin. Recent archeological discoveries have pin-pointed the probable location of these cities. They were near the Dead Sea, which is an unstable area, prone to earthquakes. People may have been aware of the danger the land posed, but it was rich in mineral deposits such as pitch and therefore a source of wealth for those who chose to live there. The God who was seen to bring about this disaster was more like the Greek thunder-god Zeus, in stark contrast to Jesus’ “Abba”.

The word “Abba” implies intimacy, for it translates as “Papa” or “Daddy.” Luke was a gentile, writing for a gentile audience, who needed to learn how to pray to this God. They would have been only too familiar with the vengeful gods of Olympus, whom one had to placate. Luke creates a scenario in which the disciples, having frequently observed their master at prayer, asked him to teach them how to pray. Luke’s version differs from Matthew's (6:9-15), as the latter was writing more for a Jewish audience who knew very well how to pray. The problem there was that the rituals could become mere recitation of words and a chance to exhibit one’s piety. The Amida, which consists of praise, petition and thanksgiving, would have had similar themes to the Lord’s prayer.

Luke’s Jesus wanted his followers to make their prayer a loving encounter with God, with the trust of children in a parent, confiding their needs and desires. If human parents know what to give their children, how much more will God be aware of what they require? However, the loving God portrayed by Jesus is a just God also. He wants the love he gives to his children to be imitated in the way they treat one another. Thus the steward who was forgiven a great debt and would not forgive his fellow servant was condemned (Matthew 18:21-35).