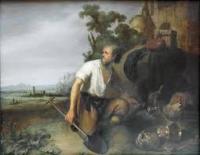 In the time of Jesus, pearls were very valuable, since diving for them was very dangerous. As there were no banks, people often buried treasure to prevent bandits or enemy soldiers from stealing it. Sometimes a person who had concealed such treasure either died or perhaps was unable to repossess it; thus someone else could claim it.

Matthew has put together a number of images of the Kingdom of Heaven, and today’s readings are the last in this series. Both the man who finds treasure in the field and the merchant are very excited by their discoveries; they are willing to sell everything in order to obtain their prizes. Many people find satisfaction in accumulating material goods, but the pleasure they bring does not usually last long. The Grimms' fairy tale ”The Fisherman and his wife”, tells of a couple who live in great poverty. One day the man catches a flounder, who tells him he is an enchanted prince, so the fisherman lets him go. Later his wife scolds him, saying that he should have asked for a wish. The flouder grants the request and the man returns home to find a nice new house and garden. The wife however is not satisfied and goes on asking for more and more till she overreaches herself and they lose everything.

The pearl that is the Kingdom of Heaven is very different, for it never loses its lustre or the treasure its appeal. Perhaps these lie in each one of us and we have to dig deeply in ourselves to unearth them. Maybe this is a lifetime’s work. Nothing must get in the way of this quest.

“With joy you will draw water from the wells of salvation” (Isaiah 12. 3)