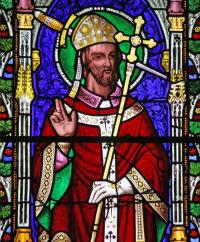 Thomas Becket was born in 1119 or 1120 in Cheapside in London. He was the son of Gilbert and Matilda Beket and was born on December 21, which is the feast of St Thomas the Apostle. Gilbert's father was from Normandy and was a small landowner or knight. Matilda was also of Norman descent. Gilbert had begun as a merchant but soon owned properties and lived on the rents from these. He also served as sheriff in the city. A friend of his father's often used to invite Thomas to his estate in Sussex where he learnt hunting and hawking.

He was sent to Merton Priory when he was ten and later to a grammar school, which could have been at St Paul's Cathedral. Later he spent a year in Paris. During Becket's schooling his father suffered financial problems and Thomas was forced to earn his living as a clerk. He got a position in the household of Theobold of Bec, Archbishop of Canterbury. He entrusted Thomas with some important missions to Rome and then sent him to Auxerre and Bologna to study canon law. He then named Thomas Archdeacon of Canterbury and he held a number of other offices. His efficiency caused the archbishop to recommend Thomas to King Henry II to fill the vacant position of Lord Chancellor. Thomas was about twelve years older than Henry but they became firm friends, and Henry entrusted the care of his eldest son Henry to him. The younger Henry is said to have claimed that Becket showed him more fatherly love in one day than the king did for his entire life.

A contemporary, Robert of Cricklade, described Thomas as follows:

To look at he was slim of growth and pale of hue with dark hair, a long nose and straight featured face. Blithe of countenance was he, winning and lovable in his conversation, frank of speech in his discourses but slightly stuttering in his talk, so keen of discernment and understanding that he could always make difficult questions plain after a wise manner.

He was also reputed to live a chaste life, unlike his master the king; however, his conduct was far from exemplary. He lived a lavish life style, refused to give up his archdeaconry, while neglecting its duties and extracting scutage (payments in lieu of military service) from ecclesiastical fiefs. He refused to visit the dying Archbishop Theobold, who had criticised his conduct. He was proud, ambitious and selfish. On one occasion when he and the King were out riding, they met a beggar who was freezing in the cold. The king ordered Thomas to give the man his fine cloak but Thomas refused.

Henry II had succeeded to the throne after nineteen years of civil war between his mother the Empress Matilda, the rightful heiress, and Stephen, who had claimed the throne. Henry was eager to restore law and order to the country and he was particularly concerned about jurisdiction over clergy, especially minor clerks, who demanded the right to be tried in ecclesiastical courts when they were accused of secular crimes. This was known as "benefit of clergy." These courts were much more lenient than the courts of the land. When Archbishop Theobald died, Henry arranged the appointment of Thomas to succeed as Archbishop of Canterbury, thinking that he would now have control over the English Church through his friend. Thomas resisted, saying that the move would destroy their friendship.

Thomas was ordained a priest on 2 June 1162 and consecrated as Archbishop of Canterbury on June 3. His behaviour changed dramatically. He began to live an austere life, doing penance, praying, wearing a hair shirt and giving alms to the poor. He had been a model chancellor; now he was determined to be a model archbishop. Henry's appointment of Thomas as archbishop had the opposite effect to what he had intended. The archbishop insisted on maintaining benefit of clergy and he began a process of regaining rights and property for the church. He also promoted the cause for canonization of Anselm, a former Archbishop of Canterbury, who also had disputes with his king.

In 1164 Henry presided over assemblies of most of the higher English clergy at Clarendon Palace. In sixteen constitutions he sought less clerical independence and a weaker connection with Rome. The king managed to obtain the assent of everyone except Becket who did agree to the substance of the Constitutions of Clarendon but refused to formally sign the documents. Henry summoned Becket to appear before a great council at Northampton Castle, to answer charges of contempt of royal authority and of malpratice as chancellor. Thomas was convicted. He stormed out of the trial and fled to the continent. He and his supporters were pursued by Henry with a series of edicts but Louis VII of France protected the archbishop. He spent nearly two years in the Cistercian abbey of Pontigny until Henry's threats against the order forced him to go to Sens. It must be remembered that Henry still ruled Normandy. Becket retaliated with threats of excommunication and interdict against the king and the bishops. However the Pope intervened, feeling a more moderate approach was needed, and eventually a compromise was reached which allowed Thomas to return to England.

In 1170 the Archbishop of York and the bishops of London and Salisbury crowned Henry's son, the young King Henry, at York. Crowning a king was a perogative of Canterbury, and Becket excommunicated all three clergymen, who fled to Normandy. He also excommunicated other opponents of the church. It was at this point that Henry, who was notoriously hot-tempered, uttered the fateful words. The most common version is:

Who will rid me of this turbulent priest?

However one historian accepts the account of the contemporary biographer, Edward Grim:

What miserable drones and traitors have I nourished and brought up in my household, who let their lord be treated with such shameful contempt by a low-born cleric?

Edward Grimand and Gervase of Canterbury gave eyewitness accounts of the murder of the archbishop. The knights initially informed Becket that he was to go to Winchester to give an account of his actions. Becket refused. He proceeded into the main hall for Vespers. The monks tried to bolt the door but Becket stopped them, saying: "It is not right to make a fortress out of the house of prayer."

The knights found Becket in a place near the door to the monastic cloister, the stairs into the crypt and the stairs leading up to the quire of the cathedral, where the monks were chanting vespers. The knights ran into the room with drawn swords, saying: "Where is Thomas Becket, traitor to the King?" "I am no traitor," Thomas replied, "and I am ready to die." The knights brutally assaulted him. Thomas said: "For the name of Jesus and the protection of the Church, I am ready to embrace death."

Almost immediately after Thomas' death he was venerated as a saint, and miracles attributed to his intercession were reported. Pope Alexander III canonized him in 1173, two years after his death. Henry II, who had caused outrage to many people, did public penance at Canterbury, which included a flogging by the monks. After a fire in the cathedral a new shrine was built in the Trinity chapel. This was later destroyed by Henry VIII at the time of the Reformation.

Thomas a Becket became the most popular saint in England and pilgrims flocked to his tomb. Geoffrey Chaucer's Canterbury Tales is set against the background of a pilgrimage to St Thomas' shrine.

And especially from every shires ende
Of Engolond to Caunterbury they wende
The hooly blissful martir for to seke
That them hath holpen when that they were seeke.

Many churches were built in his honour in England and on the continent. The King of Scotland, William the Lion, built Arbroath Abbey which was dedicated to St Thomas. Henry VIII thought that he had destroyed the devotion to the saint but he is still remembered. In 1986 a sculpture consisting of four swords was erected at the place he was murdered, together with a new altar. In 1982 Pope John Paul II and Archbishop Runcie knelt in prayer at the site of Thomas' martyrdom.

St Thomas of Canterbury, pray for us.

Note: There are many contemporary biographers of St Thomas including John of Salisbury, Benedict of Peterborough, Gilbert Foliot, Robert of Cricklade and Edward Grim. The name Thomas à Becket was a later addition and is thought to be in imitation of Thomas à Kempis.