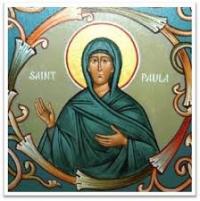 St Paula was born in 347 AD. She was the daughter of Blesilla and Rogatus and came from a rich, senatorial family which claimed descent from Agamenon. At the age of sixteen she was married to a nobleman named Toxotius, by whom she had four daughters, Blaesilla, Paulina, Eustochium and Rufina, and a son, Toxotius. She led a luxurious life having great status and was carried about the city by her eunuch slaves. She was widowed when she was 32 and continued to devote herself to her family, but became more interested in religion. Through the influence of St Marcella and her group Paula became a member of a semi-monastic group of women. She met St Jerome in 382 when he came to Rome.

A year after the death of her husband, Paula went on a tour of the holy sites with a large entourage of men and women including St Jerome. Since she was a widow and financially independent Paula was free to do this. It was after the tour that she settled in Bethlehem, where she and Jerome built a double monastery: one for Paula and her nuns and the other for Jerome and his monks. A roadside hotel was constructed to fund the monasteries. The nuns and monks were separated when they worked and at meals but they shared a common space for prayer. The nuns were further separated according to rank. Paula spent much of her time intensively studying the Old and New Testaments. She observed a strict fast and abstinence and pursued a lifestyle “to preserve a singular attachment to God” (St Jerome). She had a great devotion to the relics of Christ’s passion; for example she was shown the pillar at which Christ was said to have been tied as He was scourged. She also reflected deeply and emotionally at other sites. She became a prominent figure in the Christian community. At one point on travelling to Nitria she was warmly received by monks from Egypt. When she died on 26 January 404 a significant portion of the Palestinian population arrived in her honour.

Our information about St Paula comes from the letters of St Jerome, particularly to her daughter Eustochium. Letter 108 describes her in glowing terms: “Noble in family, she was nobler still in holiness; rich formerly in this world’s goods, she is now more distinguished by the poverty that she has embraced for Christ.”

Jerome and Paula had a very close relationship. She had mastered Hebrew and helped Jerome in his translation of the bible from Hebrew and Greek into Latin (the Vulgate). She edited his manuscripts. He was devastated by her death. Palladius felt that Jerome hindered Paula: “For though she was able to surpass all, having great abilities, he hindered her by his jealousy, having induced her to serve his own plan.”

Jerome was buried beneath the north aisle of the Church of the Nativity, near the graves of Paula and Eustachium.

St Paula of Rome, pray for us.