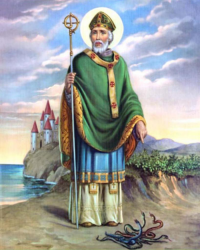 The date of his birth is uncertain but it was probably towards the end of the fourth century AD. He refers to himself as Patricius. He was the son of a decurion (a Roman cavalry officer in charge of ten men) and a deacon whose name was Calpurnius. He may have lived in what is now Cumbria but there are suggestions that he was from Scotland or Wales. According to the Confession he was captured by Irish pirates when he was sixteen. He was taken to Ireland as a slave and for six years looked after animals. At this time he was not a believer.

Christianity seems to have existed in Ireland before Patrick. It may have been brought by Roman British slaves and Palladius had been sent there by Pope Celestine, probably more to prevent the spread of heresy than to undertake missionary work. However there seems to be some confusion between the work of Palladius and of Patrick and some later writers tend to magnify Patrick at the expense of Palladius. In his Confession Patrick talks of his conversion. His time in captivity seems to have brought him a spiritual experience which led him to embrace Christianity. After six years he heard a voice telling him that he would soon being going home and that a ship was waiting for him. He escaped and travelled to a port about two hundred miles away, where he found a ship, whose captain reluctantly gave him passage. When he reached Britain he wandered for 28 days in a "wilderness" without food till he and his companions came on a herd of wild boar. Patrick’s trust in God had been rewarded. He returned to his family and began to study Christianity.

After a few years he had a vision:

I saw a man coming, as it were from Ireland. His name was Victoricus and he carried many letters, and he gave me one of them, I read the heading "The Voice of the Irish." As I began the letter, I imagined in that moment that I heard the voice of those very people who were near the wood of Foclut, which is beside the western sea; and they cried out, as with one voice, "We appeal to you, holy servant boy, to come and walk among us.

Patrick studied in Europe principally at Auxerre but is thought to have visited Marmoutier Abbey in Tours and to have received the tonsure at Lerins Abbey. St Germanus of Auxerre ordained him to the priesthood. He returned to Ireland, possibly to Wicklow but it is thought he was not welcomed there and rested some time at the islands off the Skerries coast, one of which still bears the name Inispatrick. The first sanctuary Patrick dedicated was at Saul. Shortly after this, Benin son of the chieftain Secsnen joined his group.

Patrick did not have an easy time in his work in Ireland. His Confession talks extensively about charges made against him first for something in his past and later for what seems to have been financial impropriety, against which he ardently defended himself. It is unclear exactly when he became a bishop but he obviously was one by this time, since his accusers attacked him in this capacity. He states that he returned gifts, which was difficult because it caused offence to the donors, and he refused payment for baptisms and ordinations. He writes that he baptised thousands of people. He ordained priests to lead the new Christian communities. He converted wealthy women, some of whom became nuns in the face of family opposition. He also brought the faith to the sons of kings. He spoke of the success of his mission:

Never before did they know of God except to serve idols and unclean things. But now they have become people of the Lord and are called children of God. The sons and daughters of the leaders of the Irish are seen to be monks and virgins of Christ.

His refusal to accept gifts from kings placed him outside tribal protection and he says that on one occasion he was beaten, robbed and put in chains, possibly in danger of execution. Later in his life he wrote the Letter to the soldiers of Coroticus, bitterly denouncing their capturing Christians as slaves and killing some of them. The identity of Coroticus is uncertain; he may have been a chieftain in the area of Strathclyde but it is likely that he also held power in Ireland since Patrick excommunicated him, presumably in his jurisdiction.

Patrick comes across from his writings as a very humble, brave man with a great faith in God and a determination to spread the gospel. He quotes extensively from the bible to emphasize his points, the language being a mixture of old Latin and the Vulgate. It is thought that he died in 461 and his reputed burial place is in the grounds of Down Cathedral. The memorial stone dates from 1900.

The next mentions of Patrick are in the seventh century hagiographies Tirechan and the Vita Sancti Patrici of Muirchu moccu Machtheni. Both works rely on the lost book of Ultan, who is probably the person named in 657 in the Annals of Ulster. Here Patrick is portrayed as a heroic figure who struggled with druids, overthrew idols and cursed kings and kingdoms. They refer to many churches and monasteries founded by Patrick and his converts but probably they reflect the situation in the seventh century where there was competition between the foundations that claimed ties to Patrick, especially Armagh and the church at Kildare. The Irish annals conflate Palladius and Patrick.

There are many colourful legends about Patrick. The first is his use of the shamrock to explain the Trinity. This story appeared only in 1726 though it may be older. Like many of the stories about Patrick it is not referred to in his writings. Three however was a sacred number in pagan Ireland and Patrick may well have used it in his teaching. He is said to have expelled the snakes from Ireland but scientists say that Ireland did not have any snakes. It’s possible that this story is really symbolises overcoming of paganism by Christianity as snakes were sacred to the druids. His defiance of the druids is related in the story of how he lit a fire on the pagan festival of Beltrane when the High King traditionally lit a fire on the Hill of Tara. The druids came to investigate but they could not put out the fire. The king was warned that if the fire was not put out it would burn forever.

Patrick is associated of course with the mountain of Croagh Patrick where, in Lent, he spent forty days fasting. He was harassed by demons in the form of blackbirds. However Patrick prayed and rang his bell and an angel appeared and told him that his petitions for the Irish people had been answered and they would keep the faith till Judgement Day.

St Patrick is said to have died on March 17. His feast day comes in Lent so it was a welcome break from the strict fasting that prevailed in earlier times. His feast was placed in the universal liturgical calendar due to the influence of the Franciscan scholar Luke Wadding in the early l600s. The first St Patrick’s Day Parade was held in Boston in 1737 and then in New York in 1762 led by Irish soldiers serving in the English army. The first parade in Ireland was in Waterford in 1903. Since then parades are held across the world in his honour, where people celebrate their Irish heritage and many others join with them in the fun.

St Patrick, patron saint of Ireland, pray for us.