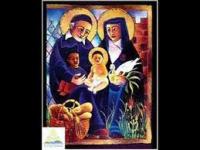 Louise de Marillac was born out of wedlock on 12 August 1591, near Le Meux in Picardy. She never knew her mother but was acknowledged by her father, Louis de Marillac, Lord of Ferrires, who claimed her as his natural daughter, though not as his heir. He was a widower at the time of Louise’s birth and from an important family. Her uncle was part of the court of Queen Marie de Medici, wife of King Henry IV of France, and Louise moved in aristocratic circles. When her father remarried, his new wife refused to accept her, so Louise was homeless but was cared for and well educated in the royal monastery of Poissy, near Paris, where her aunt was a Dominican nun. She stayed at Poissy until her father’s death and then went to live with a devout lady who taught her management skills and the secrets of herbal medicine.

When she was about fifteen Louise felt she had a vocation to religious life and applied to the Capuchin nuns in Paris, but was refused admission. Her spiritual director comforted her, saying that God had other plans for her. She was persuaded by her family that marriage was the best alternative and so she married Antoine Le Gras, an ambitious young man, secretary to Queen Marie. Louise grew to love him and they had one son, Michel. Apart from family responsibilities, Louise devoted herself to parish ministry, playing a leading role in the Ladies of Charity, an organization of wealthy women who cared for the poor and the sick.

Louise was faced with misfortune. One of her uncles who had high rank in the government was executed and the other died in prison. Her husband became chronically ill and bedridden. Louise nursed him and their child.
The situation made her very depressed and she also became beset by doubt and guilt over having turned her back on a religious vocation. St Francis de Sales comforted her as did his friend the bishop of Belley. In 1623 at the age of 32 she wrote: “On the Feast of Pentecost during Holy Mass or while I was praying in the church, my mind was completely freed of all doubt. I was advised I should remain with my husband and that the time would come when I would be in a position to make vows of poverty, chastity and obedience, and that I would be in a small community where others would do the same. I felt it was God who was teaching me these things and that, believing there is a God, I should not doubt the rest (Spiritual Writings of Louise de Marillac).

She vowed not to remarry if Antoine died, which happened three years after her spiritual experience. She also met Vincent de Paul who she recognised as the priest she had seen in that vision, having being told she would be guided to a spiritual director. Meanwhile she wrote her own “Rule of Life in the World’ which was a structure for her day. This included prayer, mass, meditation, spiritual reading, fasting,  penance, and reciting the rosary. She continued to entertain guests and look after her thirteen-year-old son Michel who had special needs.

After Antoine died in 1625, Louise had to move for financial reasons. Her new home was near Vincent de Paul. He was at first reluctant to become her spiritual director as he was busy with his “Confraternities of Charity”. Members were aristocratic ladies who helped him nurse the poor and look after neglected children; however these ladies were better suited to raising funds and dealing with correspondence than working at grass-root level. There was tension between them and the poor they served. Charitable work in seventeenth century France was completely unorganized. Vincent de Paul began to encourage young women from the countryside to devote themselves to ministry under the direction of the Ladies of Charity. These young girls formed the nucleus of the Daughters of Charity of St Vincent de Paul.

The collaboration of Louise de Marillac and Vincent de Paul lasted almost forty years. They were very different people but shared the same values of love of the poor and deprived. Vincent de Paul came from a peasant background,  was cautious, and knew how to wait, ”never to go ahead of divine providence.” Louise, on the other hand, was in a hurry to get things done and was not afraid to challenge the church or society. She deferred to Vincent de Paul’s judgement but also used gentle persuasion. Both had gone through spiritual crises in their thirties; their relationship matured as Louise moved from dependency on him as her spiritual director, to being his equal as co-founder of the Daughters of Charity. He ceased to address her as “daughter” and instead called her "mademoiselle". They seemed to have had a warm, loving relationship, illustrated by the letters they exchanged. Their different gifts meant that they complemented each other.

Meanwhile Louise found four young country girls who were suited to working with the destitute, she invited them to live in her home and began training them to care for those in need. Unlike other religious communities who were cloistered, the Daughters of Charity worked in the community. Louise instilled in them the following: "Love the poor and honour them as you would honour Christ himself." The congregation received official approval in 1655. They wore a distinctive habit which consisted of a grey wool tunic with a large headdress or cornette of white linen, which was the usual dress of Breton women in the seventeenth century.

The company served the needs of the sick and poor in their homes. They worked at the Hotel Dieu, the largest hospital in Paris. From there Louise and three nuns went to the hospital at Angers to take over the nursing services there. After negotiations with the city officials and hospital managers, Louise organized collaboration with the doctors, nurses and others to form a team which worked together. The model was successful and is still used by the Daughters of Charity today. The ministry expanded to include orphanages, institutions for the elderly and mentally ill, prisons battlefields and the galley slaves.

Louise believed in combining action and contemplation. She had been guided as a young woman to profound prayer in the tradition of the Rhenish Flemish spiritualists. and also to the spirituality of Cardinal Pierre de Berulle. However because of the Quietist movement (1) which was condemned, her biographer, Nicholas Gobillon removed any traces of mysticism from Louise’s writings and rewrote her meditations.

Louise died on March 15 1660, six months before her mentor Vincent de Paul. She was canonised by Pope Pius XI in 1934. At her death there were more than forty houses of the order in France. Her body is enshrined in the mother house of the Daughters of Charity in Paris. She was declared Patroness of Social Workers by Pope John XXIII in 1960.

Louise was a remarkable woman. She was fully of energy and very practical. One example of her gift for organization, apart from the foundation of the Daughters of Charity, was her Last Will and Testament. Here she shows her thoughtfulness in her distribution of property, acting both in the capacity of a mother and of a religious. As well as her ability to manage she also had great sensitivity in dealing with her nuns, adapting herself to their individual personalities. She had always been very devout and grew through mystical experience, centred on Christ’s Incarnation and love for humanity. This obviously nourished and sustained her work for the poor and marginalised.

(1) Quietism is a spirituality which holds that perfection consists in passivity (quiet) of the soul, in the suppression of human effort so that divine action may have full play.