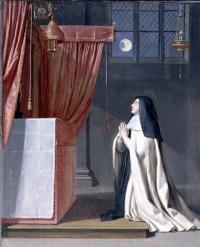 Juliana and her twin sister Agnes were born in the village of Retinnes in the Prince Bishopric of Liège. This was an autonomous state of the Holy Roman Empire, governed by a bishop who was also a prince. The sisters were orphaned at the age of five and placed in a newly-founded hospice at Mount-Cornillon, right outside Liège. It seems to have been a double monastery, with both canons and canonesses living in their own wings. They were placed initially in a small farm near the canonry. Juliana entered the order at the age of thirteen and worked for many years in the leprosarium. It is probable that Agnes died as there is no further mention of her in the archives. Juliana must have had a very good education for she read the writings of St Augustine and St Bernard in Latin.

Juliana always had a great devotion to the Eucharist (as did many of the women of Liège) and longed for a special feast day in its honour. When she was sixteen she had her first vision. This was of the full moon in its splendour crossed diametrically by a dark stripe. God gradually helped her to interpret the moon as the life of the church and the darkness the lack of a feast in honour of the Body and Blood of Christ. For a long time she confided this only to Blessed Eve, whose cell adjoined hers, and to a few trusted sisters. She was unable to act any further on her vision. This is illustrated on the historiated initial letter (an enlarged letter containing a picture at the beginning of a paragraph or part of a text) of her Vita as it appears in Paris, Bibliotheque de l’Arsenal (MS 945 folio 2).

Around 1225, she was elected prioress of the double canonry and spoke about her visions to her confessor, Canon John of Lausanne, who was a secular canon of the collegiate chapter at St Martin Basilica. He talked to many of his eminent contacts which included a bishop, a Dominican prior and the Archdeacon of Liège, Jacques Pantaleon of Troyes, who later became Pope Urban IV. They agreed that there was nothing to prevent such a feast being established and to endorse its institution. Juliana, working with Canon John composed the initial version of the first office, Animarum cibus. This can be seen in the composite manuscript The Hague, National Library of the Netherlands (KB70. E. 4) In 1246 Bishop Robert of Liège instituted the first feast of Christ’s Body and Blood for his own diocese. He died the same year and never saw it completed, though it was celebrated by the canons of St Martin.

Juliana suffered much as a consequence of political rivalries and demands for new rights among the citizens. She reestablished strict Augustinian rules when she became prioress. In 1240 the canonry and leprosorium came under the supervision of a corrupt man called Roger, who had used very underhand means to gain his position. He disliked Juliana and her reproaches and incited the citizens against her, accusing her of stealing the hospital funds. She was forced to flee to her friend Dame Eve and then obtained shelter in Canon John’s house. She was vindicated with the help of Bishop Robert but when he died in 1227 Roger was reinstated under the new bishop. Juliana had to flee, going to various places before settling in the Cistercian Abbey of Salzinnes with the help of Abbess Imene, sister of the Archbishop of Cologne. Her final destination was Fosses la Ville in the county of Namur where she lived in seclusion till her death in 1258.

In 1261 the Archdeacon of Liège, Pantaleon, became Pope Urban IV. He instituted the Solemnity of Corpus Christi on the Thursday after Pentecost as a feast for the entire Latin Church, and commissioned his chief theologian Thomas Aquinas to write a new office. His approach differed from that of Juliana and John as his emphasis was more on the priest as celebrant, the representative of Christ the eternal High Priest. Juliana on the other hand saw it as a community festival, with the faithful gathered in church, proclaiming their communion with one another. In modern thinking on the Eucharist both saints would be correct but it was Thomas Aquinas’ office that was accepted. However the subsequent popularity of Corpus Christ processions meant that Juliana’s concept of a community festival did in fact happen. The feast was not widely celebrated until 1317 during the pontificate of John XXII.

Juliana of Liège was a shy person, although very determined to pursue the things she believed in. For a medieval woman she was very talented, not only being well read and conversant with Latin but able to compose an office and set it to music. She deserves to be better known, like Hildegard of Bingen and Hilda of Whitby. The main source of her life is the Vita, written by an unknown author, claiming to be commissioned by John of Lausanne and produced probably between the years of 1261 and 1264. He claims he is translating a fragmentary French source through a religious person close to Juliana, possibly Blessed Eve. Its emphasis is on her importance in being the means of the Feast of Corpus Christi being established rather than on promoting her cult as a saint. A critical edition of the Vita was published in French by the Belgian scholar Jean-Pierre Delville, Bishop of Liège.

Juliana was canonised in 1869 By Pope Pius IX.

St Juliana of Liège, pray for us.