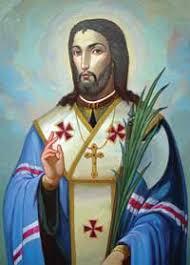 St Josaphat was born Ioann Kuntsevych in 1580 in Volodymyr, in the Lesser Polish province of the Polish crown (now the Ukraine). He was baptized into a family associated with the Eastern Orthodox church. Although his father was descended from nobility, he went into business and held the office of town councillor. Both of Ioann’s parents were pious and encouraged him in religious observance. In fact he became proficient in Church Slavonic. and memorised the Horologion (Book of Hours for Eastern Orthodox and Eastern Catholics). Owing to the poverty of the family he was apprenticed to a merchant in Vilnius. There he became acquainted with a Calvinist convert to the Latin church, Rutsky, who transferred to the Byzantine rite. At the Union of Brest, most of the Eastern Orthodox bishops of the Commonwealth of Poland-Lithuania were united with the Roman Catholic Church on the understanding that they could keep their own Byzantine rite. Because of his acquaintance with Rutsky, Ioann became interested in the Catholic church.

In 1604 when he was in his early twenties he entered the Monastery of the Trinity of the Order of St Basil in Vilnius. He was given the religious name Josaphat. His sanctity attracted large numbers of people who came to visit him.. He was ordained to the diaconate. Meanwhile Rutsky, who had been ordained a priest, brought about a revival of Eastern Catholic monasticism among the Ukranians and Belarusians.

In 1609, Josaphat, after studying under a Jesuit, was ordained a priest by a Catholic bishop. He subsequently became hegumen (prior) of several monasteries. On 12 November 1617 he was consecrated coajutor archeparch for the Archeparchy (Archdiocese) of Polotsk. He succeeded as archeparch in March 1618. During his time in that office the city cathedral was rebuilt.

He was faced now with the task of persuading the people to accept union with Rome. He faced stiff opposition from the monks who feared Latinisation of the Byzantine rite. He restored the churches, issued a catechism for the clergy which they were instructed to memorize, composed rules for priestly life and appointed deacons to superintend their observance. He assembled synods in various towns and opposed the attempts of the Grand Chancellor of the Grand Duchy of Lithuania to make concessions to the Eastern Orthodox Church. In his personal life he practised severe mortifications.

There was, however, growing dissatisfaction with the settlement among some of the provinces, and a group of disuniates (those who did not accept the union with Rome) assembled at Kiev and elected new Eastern Orthodox bishops including Meletius Smotrystky who became Archeparch-elect of Polotsk. Therefore there was a rival diocese to that of Josaphat. Sectarian violence broke out over ownership of church property and many were killed. It should be noted that Josaphat received little support from the Polish bishops, probably because of their opposition to the Byzantine rite.

In 1623 he went to Vitebsk, where there was great opposition to him in order, to bring abut reconciliation. He said: “If I am counted worthy of martyrdom then I am not afraid to die.” A priest shouted insults and Josaphat shut him up in his house. He was released but the mob was infuriated. At the sound of the cathedral and church bells ringing, they broke into the palace where Josaphat was staying and began to attack his servants. Josaphat stepped forward and said: “My children what are you doing with my servants? If you have anything against me, here I am, but leave them alone!” Amidst cries of “Kill the Papist!” Josaphat was hit with a stick, then with an axe and finally was shot through the head. He was dragged naked through the streets and his body was thrown into the river together with a dog that had tried to protect him.

The perpetrators of Josaphat’s murder were punished severely and the disuniates lost their property and were broken up. Smotritsky became reconciled to Rome in order to escape punishment. Josaphat’s body was recovered from the river and lay in state in the cathedral of Polotsk. He was beatified in 1643 and canonized in 1867. He now lies in St Peter’s in Rome, placed under the altar of St Basil the Great.

Josaphat is a controversial figure. In God’s Playground by Norman Davies, the author claims that he was not a man of peace, and was responsible for oppressions, including the refusal to bury the dead of Orthodox peasants in consecrated ground. Certainly the struggle between the Eastern Orthodox and the Eastern Catholics appears to have been very bitter. On the other hand Josaphat seems to have led an exemplary life from his childhood. He practised very severe penances, including wearing a hair shirt and a chain round his waist. He never ate meat; he fasted and slept on a bare floor. In fact, the Jesuits advised him to moderate his austerities! He studied arduously and drew many Catholic proofs from his books of Byzantine liturgy. He performed Church services with great devotion, and preached and heard confession in many diverse places. He was noted for his kindness to the poor.

The process of Josaphat’s canonization by Pope Pius IX coincided with the January Uprising against the Russian Empire (1863-65), which aimed at restoring the Polish Lithuanian Commonwealth which had been broken up with the partitions of Poland. It was seen as a papal gesture of moral support for the Polish insurgents and an insult to Russia. As a result the last Eastern Catholic eparchy in the Russian Empire was extinguished and the Eastern Catholics forcibly converted. It was the last thing that Josaphat would have wanted, for he genuinely longed to reunite the Orthodox and Catholic Churches which had been tragically separated since 1054.

St Josaphat, archbishop and martyr, pray for us.