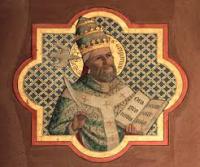 The date of Gregory’s birth is uncertain but he was probably born in the year 540. He came from a wealthy Roman family, with close connections to the church. His father Gordianus was a patrician, who served as a senator and was also for some time a Prefect of the city of Rome. Gregory’s mother was well-born and is honoured as a saint by the Catholic and Orthodox churches, as are two paternal aunts. Gregory was also a great-great-grandson of Pope Felix III. The family lived in a villa suburbana on the Caelian Hill. They also owned estates around Rome and in Sicily.

Gregory was born into a time of upheaval. The so called Justinian plague was raging and there was a power struggle between the Goths and the Emperor Justinian and also an invasion of the Franks. He received a good education, studying grammar, rhetoric, the sciences, literature and law, and excelled in everything. He knew Latin but not Greek and also learnt history, mathematics and music. At the age of 33 he became Prefect of Rome, like his father, which meant he was responsible for finances, provisioning, policing and public works. This helped him develop administrative skills. He also created six monasteries with his personal wealth.

However, this kind of life did not satisfy him. On his father’s death Gregory converted the family home into a monastery dedicated to Andrew the apostle; after his death it was renamed San Gregorio Magno al Celio. Reflecting on his life of contemplation he made the following statement:

“in that silence of the heart, while we keep watch within through contemplation, we are as if asleep to all things without.”

He was dedicated to the vow of poverty, and severely punished a monk - who was on his deathbed - who had stolen three gold coins: he left the monk to die alone and then threw his body on to a manure heap together with the three gold coins saying:

“Take your money with you to perdition.”

However, Gregory did have masses said for the monk’s soul.

John the Deacon, biographer of Gregory, saw a portrait which the monks made of him after his death. He was “rather bald” and had a “tawny” beard like his father. The hair on both sides of his head was long and carefully curled. his nose was “thin and straight” and “slightly acquiline”, while “his forehead was high,” he had thick “subdivided lips” and a chin of “comely prominence” and “beautiful hands”.

He viewed being a monk as “the ardent quest for the vision of our creator”. Even as Pope he lived as a monk. At this time he made a detailed study of the scriptures. He undertook rigorous fasts which affected his health.

Pope Pelagius II ordained Gregory a deacon and asked his help in trying to heal the schism of the Three Chapters in Northern Italy. However this did not happen until well after Gregory’s death. In 579 the same Pope appointed Gregory as his “apocrisiarius,” that is, ambassador to the Imperial court in Constantinople. Though the Roman Empire in the west had collapsed, it had survived in the east. Pelagius urged him to see the help of the Emperor against the Lombards in Italy but the Emperor’s energy was taken up with struggles in the east and he had no appetite for relieving the west, Gregory failed in this initiative. He became involved in a controversy about the nature of risen bodies. The Byzantine patriarch maintained that they were “impalpable, more light than air.” Gregory, using scripture, pointed to the palpability of Jesus’ risen body. He never managed to learn Greek so was limited in his sources. However the Emperor took his side and the patriarch’s writings were burnt. Gregory in fact achieved little in Constantinople but at least he came to the realisation that the Eastern Empire would be of no assistance to Italy.

Gregory left Constantinople for Rome in 585, returning to his monastery on the Caelian hill. He spent much of his time giving lectures on scripture. It was during this period that he saw the English youths in the forum. English accounts, including that by the Venerable Bede, maintained that these were slaves. However the St Gall manuscript suggests that they were free visitors to Rome. Gregory on being told they were Angles cried:

“Not Angles but angels.”

This was the origin of the mission to Canterbury.

He was elected by acclamation to succeed Pope Pelagius II in 590, when the latter died of the plague that was sweeping the city. He was approved by an Imperial iussio from Constantinople the following September. Gregory resisted his elevation to the papacy but reluctantly accepted it. He led a pilgrimage to the basilica of the Blessed Virgin to pray for an end to the plague and there is a legend that the Archangel Michael appeared on the summit of the mausoleum of Hadrian (now the Castel de St Angelo) and was seen sheathing his sword, indicating that the plague was over.

The Pope faced many challenges in addition to the plague. The Tiber had burst its banks and destroyed the grain supplies; he provided food from the papal estates. He had to keep the Lombards at bay, often with money. He also had to deal with the Byzantine Empire, which wanted to defend its seat of government in Ravenna at the expense of Rome. Gregory eventually managed to make peace with the Lombards.

In fact Gregory had to act as both a spiritual and secular leader. He administered the papal lands for the purpose of poor relief, one of his main concerns. The rich families also provided charitable donations. Gregory organised food supplies and, for those who were too ill or infirm to pick up their portion, he sent out people with prepared food each morning. It was said that he would not dine till the indigent were fed, and twelve of them would share his table. To spare the needy living in rich homes the humiliation of seeking charity, he would send a gift of food cooked by himself.

Gregory made reforms of the Roman liturgy and reduced the part played by deacons. John the Deacon, who lived three centuries after Gregory’s death, attributed the development of plainchant to him. Gregory probably collected various regional chants and organized them into a uniform whole. However many scholars feel that the main developments in plainchant came later.

He was determined to maintain the primacy of the papacy. He saw church and state, that is the Papacy and the Emperor, co-operating in their respective roles. However he expected the secular power to protect the church and not only to suppress heresy but also to enforce discipline which was very important to him. He wrote Liber pastoralis curae (Book of Pastoral Rule), wherein he set out the kind of person a bishop should be and how he should perform his duties.

Gregory was remarkable for his treatment of the Jews. He was responsible for a Papal Bull, requiring Christians to protect and defend the Jewish people, which became official doctrine. He publicly disapproved of the forced baptism of Jews and censured the bishop of Marseilles for having done this. In various letters he insisted on the right of the Jews to freedom of action, both in civil affairs and in synagogue worship. He did however limit them from exceeding the rights granted to them under imperial law, particularly in the ownership of Christian slaves.

He concerned himself with the spiritual needs of his people. A number of his sermons still exist. It was he who instigated the “stations”: he would meet clergy and people at a specific church, where mass would be celebrated and the pope preach. His homilies were simple expositions of scripture. He was responsible for the suggestion that Mary of Bethany, the sinful woman of Luke’s gospel who anointed Jesus’ feet, and Mary Magdalene were one and the same person. Scholars now believe this is incorrect and that there is no evidence that Mary Magdalene was a “fallen” woman.

Perhaps one of the most memorable things that Gregory did was to send St Augustine to England, after his experience in the market place. Kent was an important place at the time and its king had a Christian wife. There were already Christians in England but Augustine’s mission, receiving the support of the King (who eventually converted), led to the faith gradually spreading throughout the country.

Gregory is commonly credited with founding the medieval papacy. He is the only pope between the fifth and eleventh centuries whose writings survive in a large number. Apart from the commentary on Job and the Rule for Pastors, already mentioned, he wrote the Dialogues which were four books of miracles, signs and wonders done by holy men, mainly monks in sixth century Italy. There are also his sermons, and copies of eight hundred and fifty four letters have survived.

Gregory suffered ill health, especially towards the end of his life. He died on 12 March 604. He is one of only three Popes to be called “the Great.” He established the authority of the papacy over both the western and eastern churches. He was not noted either for his learning or as a theologian although he has been named as one of the doctors of the church. He was a monk, a preacher and an administrator with a deep concern for the poor. Some criticised him for being superstitious, with too much interest in wonders and miracles.

The chief sources of information on his life include first of all his own writings; then there are those of his contemporary Geoffrey of Tours. The earliest biography, Vita Antiquissima, was written in the early eighth century by an unknown monk in Whitby. There are also the Venerable Bede’s Historia Eccles II and the Vita Gregorii of John Deacon.

Gregory was made a saint by popular acclamation.

St Gregory the Great, pray for us.