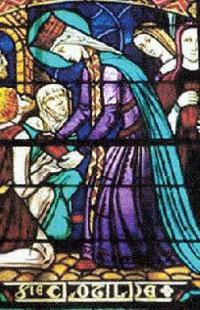 Clothilde was born at the Burgundian court of Lyon in 474. She was the daughter of King Chilperic II of Burgundy. When his father died, the inheritance was divided between three sons and Chilperic reigned in Lyon. He was murdered by his brother and Clothilde and her sister fled to Geneva to seek refuge with their uncle Godegisil. Chrona - the elder sister - became a nun and founded a church, while Clothilde was very soon married to the Frankish King Clovis, of the Merovingian dynasty. They had five children. Clothilde insisted on having the first child baptised and when he died soon afterwards, Clovis was very angry, saying that if the child had been dedicated to his gods, he would have lived. The second child was also baptised and likewise became ill. Clovis predicted that he too would die but Clothilde prayed fervently and he survived.

Clovis ruled over a kingdom which would eventually comprise some of what is modern Switzerland and Germany, Belgium and a large part of France. Clothilde was very anxious that her husband should become a Christian and her wish was granted in 496 when Clovis was baptised by the Bishop of Rheims on Christmas day. According to tradition, on the eve of the battle of Tolbiac against the Alamanni Clovis promised to be baptised if he was victorious the next day.

Clothilde and Clovis built the church of the Holy Apostles in Paris, afterwards known as the Abbey of St Genevieve.

Clovis died in 511 and Clothilde retired to the Abbey of St Martin of Tours. In 523 Clothilde’s sons went to war against her cousin King Sigismund of Burgundy. He was deposed and assassinated the following year and his body thrown down a well. Subsequently her eldest son was killed in a war with Sigismund’s successor Her daughter Clothilde also died. She tried in vain to protect the interests of her three grand children against her other two sons. Two of the grandsons were murdered by their uncle. After this Clothilde devoted herself to a saintly life building churches and monasteries and distancing herself from power struggles at court.

Clothilde died in 545, at the tomb of St Martin of Tours, and she was buried in the Abbey of St Genevieve, which was destroyed at the French Revolution. Her relics are now in the church of Saint-Leu-Saint-Gilles in Paris.

The main source for Clothilde’s life is by Gregory of Tours, who lived between 538 and 594 and who wrote the History of the Franks. As Bishop of Tours, his account tends to be coloured by his own concerns about good and evil and he mixes history with legend and hagiography.

Clothilde is patroness of queens, widows, brides and those in exile. In Normandy she is venerated as patroness of the lame. Several images of her remain including a sixteenth-century stained-glass window at Andelys in Normandy, where she founded a school for daughters of the nobility. It was later destroyed by the Normans. There is also a fountain in Andelys named after the saint, which is said to cure skin diseases.

St Clothilde, pray for us.