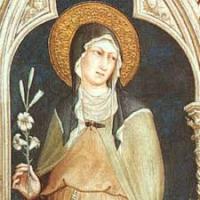 St Clare was born in Assisi on 16 July 1194. Both her parents came from noble families. Her mother was a very devout woman and had been on pilgrimages to Rome, Santiago de Compostela and the Holy Land. She would later join Clare’s community. As a child Clare was very pious and generous in almsgiving. In the tradition of well-to-do families she was to have been suitably married but she heard St Francis of Assisi preach during a Lenten service and she asked him to help her live a life according to gospel values. On the eve of Palm Sunday 1212, she left her father’s house and accompanied by her aunt Bianca and another companion went to meet Francis at Porziuncula. Her beautiful long hair was cut and she exchanged her rich dress for a simple robe and veil. Francis established her in a Benedictine convent. Her father attempted to force her to return home but she tore off her veil to display her cropped hair and clinging to the altar, vowed she would have no husband but Jesus Christ.

Since she desired greater solitude Francis placed her in another Benedictine monastery till the small huts near the church of St Damiano, which Francis had repaired, were ready for them. Clare was joined by her sister Catarina, who took the name Agnes and other women; they were known as the “Poor Ladies of San Damiano.” They lived a life of austerity, going barefoot, sleeping on the floor and abstaining from meat. They kept almost complete silence. Unlike their brother Franciscans, who were intinerant preachers, the nuns lived an enclosed, secluded life. San Damiano became the most important house of the order.

In 1228 Pope Gregory IX offered Clare a dispensation from the vow of strict poverty. She replied:

“I need to be absolved from my sins, but not from the obligation of following Christ.”

The Pope therefore gave the order the Privilegium Pauperitatis which decreed that no one could oblige them to accept any possession.

For a short time Francis directed the order but in 1216 Clare accepted the role of Abbess. She now had more authority than when she was prioress and required to follow the orders of a priest. She resisted attempts by church leaders to impose a rule on them closer to that of St Benedict, wanting to remain faithful to Franciscan ideals. She encouraged and supported Francis caring for him during his final illness.

Clare corresponded frequently with other abbesses, continually resisting attempts to weaken the commitment to poverty, expressed in the rule she wrote for her order. She wrote letters - which can still be read today - to Agnes of Bohemia, daughter of King Ottokar I of Bohemia, and sent five nuns from San Domiano to found a monastery in Prague, the first north of the Alps. Other communities were founded in Italy, France and Germany.

In 1240 and 1241 the monastery of San Domiano was attacked by armies. In the first instance the Emperor Frederick II engaged a troop of Saracens. Clare prayed that God “would protect those I cannot protect.” She then held the Blessed Sacrament up in a window. The troops fell back and the following day the Emperor withdrew the soldiers. The next year the nuns were again threatened but Clare’s prayers were once more successful. Often she is pictured holding the Blessed Sacrament.

She was ill for much of her life. In her last years she was confined to her bed. She sighed and said, “Lord God I have been left alone with you.” Then she found she could hear the organ, the office and the mass, and saw it all on the wall of her cell as though she were actually present. For this reason, in 1958 Pope Pius XII made her patron saint of television. She was frequently consulted by popes, cardinals and bishops even though she never left her monastery.

On 9 August, two days before her death, the papal bull Solet Annuere of Pope Innocent IV confirmed that Clare’s rule would serve as governing rule for Clare’s order of “Poor Ladies.” She was the first woman in church history to write a rule and have it approved. She died on 11 August 1253. Her last words were:

“Blessed be you, O God, for having created me.”

She was canonized two years after her death by Pope Urban IV in 1255. Construction of the basilica di Santa Chiara was completed in 1260 and her remains transferred to under the high altar. Six hundred years later her relics were buried in a newly constructed shrine in the crypt. The Order was renamed the Order of St Clare in 1263, now informally known as the Poor Clares. It has monasteries in seventy five countries in the world. Her feast day is 11 August.

St Clare of Assisi, founder of the Poor Clares, pray for us.