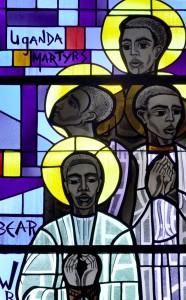 Charles Lwanga was born in 1860 and came from the Baganda tribe in the kingdom of Buganda, which was situated in the central and southern part of what is now modern Uganda. Christianity had begun to spread there from 1879 with the work of the White Fathers and other missionaries. They were welcomed by King Metusa. On his death however, his son Mwanga II became king; he was a corrupt man and a paedophile, who abused his young pages. Charles Lwanga served as chief page and later Major Domo to this king. Mwanga had been persuaded that Christians were a threat to his rule and his gods. A persecution started after a massacre of Anglican missionaries, including Bishop James Harrington. Joseph Mukasa Balikuddembe, the Catholic Major Domo, reproached the King for the killings and as a result was beheaded. Lwanga was ordered to take his place. It was then that he sought baptism from the Catholic missionary, Pere Giraud.

In 1886 Mwanga called a general assembly of the court and condemned two pages to death, The following morning Lwanga secretly baptised some of his charges who were catechumens. He also tried to protect them from the king. In the assembly Mwanga called on those present to renounce their Christianity. In response, led by Charles Lwanga, the pages declared their fidelity to their religion. They were condemned to death and the king directed that they be marched to the traditional place of execution. Three prisoners were murdered on the way there.

On the day of execution, 3 June 1886, Lwanga was separated from the rest by the Guardian of the Sacred Flame for private execution, in keeping with custom. As he was being burnt Charles said to the Guardian:

It is if you are pouring water on me. Please repent and become a Christian like me.

Twelve Catholic boys and men and nine Anglicans were then burnt alive. Another person was clubbed to death.

Charles Lwanga and his companions were canonized on 18 October 1964 by Pope Paul VI who visited Uganda in 1969, the first pope to do so. The Basilica of the Uganda Martyrs was built on the site of the executions and served as their shrine. The Brothers of St Charles Lwanga (Luganda Bannakaroli Brothers) were founded in 1927 as an indigenous religious congregation of Ugandan men, committed to providing education to the disadvantaged youth of their country.

St Charles Lwanga and companions, pray for us.