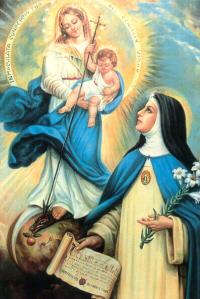 Beatrice da Silva (1424-1492) was a Portuguese noble woman, one of eleven children born to Rui Gomes da Silva - first governor of Campo Major, Portugal, after it was reconquered from Arab rule - and of Isabel de Menezes, the Countess of Portalegre. She was raised in the castle of Infante John, Lord Reguengos de Monsaraz. In 1447 Beatrice accompanied his daughter, Princess Isabel of Portugal, as her lady in waiting when Isabel went to marry King John II of Castile and Leon. She became a close friend of the queen but unfortunately her beauty made Isabel jealous. It is said that a suitor, whom Beatrice had rejected, insinuated to the Queen that Beatrice was a rival for the King's affections, and she imprisoned Beatrice in a tiny cell. There is a story that she shut her in a chest. After a few days a relative, concerned about Beatrice's welfare, persisted in questioning Isabel; the Queen showed him the chest where, expecting to find a body, he found Beatrice in perfect health. While imprisoned, Beatrice had a vision of Our Lady, who told her to found a new order in her name.

Beatrice escaped and went to Toledo. On the journey she met two Franciscan friars who told her she would be the mother of many children. She protested that she had taken a vow of purity to the Queen of Heaven. "What we have said will come to be," they told her, and then they vanished. Beatrice believed that Mary had sent St Francis and St Anthony to give her consolation.

In Toledo she took refuge with the Dominican nuns and for 37 years led a life of holiness without becoming a member of the order. In 1484 Beatrice and a few companions took possession of a palace in Toledo set apart for them by the new Queen Isabella (who married Ferdinand of Aragon). Isabella of Castile was a devout woman and took a great interest in Beatrice's work. The monastery was named Santa Fe, which was dedicated to honouring the Immaculate Heart of Mary.

In 1489, with the permission of Pope Innocent VIII, the nuns adopted the Cistercian rule, bound themselves to daily recitation of the Divine Office of the Immaculate Conception, and were placed under obedience to the ordinary of the diocese. Beatrice chose the habit, which is white with a white scapular and blue mantle with a medallion of Mary under her title of the Immaculate Conception.

Beatrice died in 1492 in the monastery which she had founded. Her remains are still venerated in the chapel of the monastery.

In 1501 Pope Alexander VI united the nuns of Sante Fe, which Beatrice had founded, with the neighbouring Benedictine monastery of San Pedro de las Duenas and put them all under the Rule of St Clare. Through this the order became connected with the Franciscans. Pope Julius II gave the order a rule of life of its own in 1511 and special constitutions were drawn up by the Franciscan Cardinal Francisco de Quinones, establishing the community as the Monastery of the Immaculate Conception. The order spread in Europe and South America. At its height there were some 2,000 monasteries of the Order throughout the world. In the twentieth century there was a major change, following Vatican II's instructions for orders to go back to the spirit of their founders. Mother Mercedes de Jesus de Egido y Izquierdo, having studied the origins of the order, decided that the direction should be in imitation of the virtues of the Blessed Virgin Mary. New constitutions were drawn up and it was removed from the Franciscan influence imposed by the papacy. The changes were approved by the Vatican in 1996.

Beatrice de Silva was canonised by Pope Paul VI in 1976. Her Feast day is 1 September.