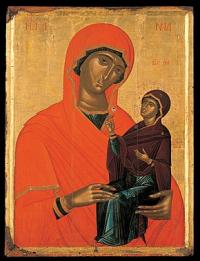 The canonical books of the New Testament do not mention Mary’s parents. This is not surprising, since the gospels are not detailed biographies, but rather narratives of the salvation of man through the life, death and resurrection of Jesus. However, traditions about Mary’s family, childhood and education developed very early in the history of the church. The oldest and most influential of these is the apocryphal Gospel of St James, written in about 150 AD. The author claims to be the half-brother of Jesus from an earlier marriage of Joseph. The oldest manuscript, Papyrus Bodmer, was discovered in 1952 and is now in the Bodmer library in Geneva. The gospel was attacked by Jerome as containing absurdities and condemned by Popes Damasus I, Innocent I and Gelasius I in the late fourth and fifth centuries; however the stories it told were widely circulated and were later further popularised by the Gospel of Pseudo Matthew, dating from between the seventh and ninth centuries.

The gospels add further detail to the infancy narratives of Matthew and Luke. They also seem to replicate the story of the childless Hannah in the Old Testament, recounting that St Anne and her husband Joachim prayed for a child and when the prayer was answered, Anna placed the three year old Mary in the Temple, as her predecessor had placed Samuel with Eli. Anne and Joachim were described as a wealthy couple. but Joachim was the object of reproach because he was childless. An angel appeared to Anne and promised that she would bear a child.

Devotion to St Anne developed earlier in the Eastern Church, in about the sixth century; Justinian built a church in Constantinople in her honour, and her relics were brought there from the Holy Land in 710 and kept there till 1333. The earliest pictorial sign of her veneration in the west is an eighth-century fresco in the Church of Santa Maria Antiqua, Rome. Crusaders and travellers from the Middle East probably made Anne more widely known.

The Golden Legend, compiled by a Dominican, Jacobus de Voragine, Archbiship of Genoa, in the thirteenth century, incorporated the earlier stories of Anne and Joachim. It gives the first evidence of a feast of St Anne on 26 July. This was made universal by Pope Gregory XIII in 1584. It is probable that the story that Anne was married three times and was the mother of Mary of Cleophas and Salome were added from an earlier work. Indeed, the author drew from 130 sources. Jacobus made no claim to be historically accurate; his aim was to recount the legends with the wondrous deeds of the saints. The Golden Legend was very popular in the Middle Ages and was translated into many languages. Its theme of saintly heroism paralleled the tales of chivalry which were widely read during medieval time. It was one of the books that St Ignatius read while he was recovering in the castle of Loyola.

Well-known shrines to St Anne are that of St Anne d’Auray in Brittany and the Basilica of St Anne de Beaupre near the city of Quebec. St Anne is honoured also in Islam though she is not named. She is a popular subject in art. Leonardo da Vinci painted her with Mary and the infant Jesus; this painting is now in the Louvre.

St Joachim had his own feast day but in 1969 the Roman Calendar joined him with his wife Anne on July 26, so that the grandparents of Jesus are now remembered together.

Saint Anne and Saint Joachim, parents of Mary and grandparents of Jesus, pray for us.