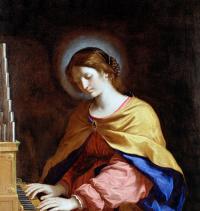 The details of St Cecilia’s life are mostly legend, though her martyrdom is a historical fact. Most authorities agree that she was born in Rome in the second century AD and was martyred there under the Emperor Alexander Severus. Others say she died in Sicily in the reign of Marcus Aurelius. It is said that despite having taken a vow of virginity at an early age, her parents forced her to marry a young man named Valerian, who was a pagan. On her wedding night, Cecilia told her husband that she had an angel protecting her, who would punish him if he tried to consummate the marriage but would love him if he respected her virginity. Valerian asked to see the angel and was told by Cecilia that if he went to the third milestone on the Via Appia and was baptized by Pope Urban I he would see this angel. Valerian did as he was told and saw the angel standing beside his wife, crowning her with a chaplet of roses and lilies.

Valerian and his brother were executed for helping to bury martyred Christians, together with the Roman soldier Maximus, who was supposed to execute them. Cecilia continued this work and was condemned to death by being suffocated in her own bathhouse. However she remained unharmed. Following this the executioner tried to behead her, striking her in the neck three times. This too failed to kill her and by law he was forbidden to strike again. She lay dying for three days. She was buried in the catacomb of Callixtus. In the ninth century Pope Paschal wanted to rebury the relics in the church named after the saint in Trastevere, which was said to have been built on the site of Cecilia’s house. He had difficuly in finding her remains, but in a dream St Cecilia encouraged him to go on searching. The body were eventually found; it was wrapped in costly gold material and reburied under the high altar in the church at Trastevere. In 1599 when the church was being renovated her remains were found to be incorrupt - she looked as though she was sleeping.

Much of Cecilia’s life story was written in the fifth century AD and probably is not historical. However legend carries its own truth and Cecilia became an inspiration like Saints Ursula and Lucy, particularly as the patroness of musicians. The story goes that she sang in her heart to her true spouse, Jesus, on her wedding day. Purcell, Handel, Gounod and Benjamin Britten were among the composers who wrote music in her honour. Dryden and Alexander Pope wrote poems about her and she is the subject of Geoffrey Chaucer’s Second Nun’s Tale. She is one of the seven women, apart from Our Lady, mentioned in the canon of the mass.

St Cecilia, patroness of musicians, pray for us.