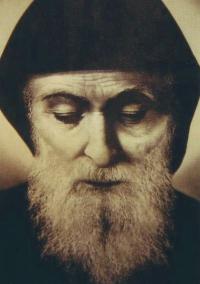 The relics of Saint Charbel, a Maronite Monk from Lebanon who has many miracles attributed to his intercession, will visit Galway Cathedral on Sunday 29 January between 3.00pm ad 5.30pm. There will be an opportunity for private prayer and to receive an individual blessing.

Charbel Makhlouf (8 May 1828 – 24 December 1898) born Youssef Antoun Makhlouf and venerated as Saint Charbel, was a Maronite monk and priest from Lebanon. During his life, he obtained a wide reputation forholiness, and for his ability to unite Christians and Muslims. He is venerated as a saint by the Catholic Church. He is known among Lebanese Christians as the "Miracle Monk ofLebanon" because of the favours received through his intercession,especially after prayers are said at his tomb in the Monastery of Saint Maron in Annaya, Lebanon.

Youssef Antoun Makhlouf was born on 8 May 1828, one of five children, in the mountain village of Bekaa Kafra, the highest by elevation in Lebanon. His father, Antoun Zaarour Makhlouf, was a mule driver who died in August 1831 while returning from corvée for the Turkish army, leaving his wife Brigitta (née Chidiac) a widow to care for their children. She remarried a man who went on to Holy Orders and became the parish priest of Bekaa Kafra.

Makhlouf was raised in this pious home, and became drawn to the lives of the saints and the eremitical life practiced by two of his uncles. As a young boy, he was responsible for the family's small herd of cows. He would take the herd to a nearby grotto, where he had enshrined an icon of the Blessed Virgin Mary. He would spend the day in prayer.

In 1851 Makhlouf left his family to begin training as a monk of the Lebanese Maronite Order at the Monastery of Our Lady in Mayfouq. He later transferred to the Monastery of Saint Maron in Annaya, in the Byblos District near Beirut. Here, he received his habit and took the religious name Charbel, after the 2nd-century Christian martyr of Antioch. He made his final religious profession in the Order on 1 November 1853.

As a young monk, Makhlouf began to prepare himself for ordination by studying philosophy and theology at the Monastery of Saints Cyprian and Justina in Kfifan, Batroun District. Among his professors at the seminary was Nimatullah Kassab, who was himself later also declared a saint. He was ordained six years later, on July 23, 1859, in Bkerke. He was sent back to the Monastery of Saint Maron, where he lived a life of severe asceticism.

In 1875, Charbel was granted by the abbot of the monastery the privilege of living as a hermit at the Hermitage of Saints Peter and Paul, a chapel under the care of the monastery. He spent the next 23 years living alone until his death from a stroke on 24 December 1898.

Makhlouf was interred at the Monastery of Saint Maron on Christmas Day that year. It was reported that during the transport of his corpse, inclement weather conditions hindered the pallbearers in carrying out their duty.

"Father Charbel died on the eve of Christmas; the snow was heavy. We transferred him to the monastery on Christmas day. Before we moved him, the snow was falling rapidly and the clouds were very dark. When we carried him, the clouds disappeared, and the weather cleared." – George Emmanuel Abi-Saseen, one of the pallbearers.

One story claims: "A few months after his death, a bright light was seen surrounding his tomb and the superiors opened it to find his body still intact. After that day, a blood-like liquid flowed from his body. Experts and doctors were unable to give medical explanations for the incorruptibility and flexibility." In 1950 and 1952, his tomb was opened and his body still had the appearance of a living one. Additionally, the 1950 television tape of his exhumation showed Makhlouf's body as still intact, despite the grave having become severely rusty. The official site mentions: In this century his grave has been opened four times, the last time being in 1955, and each time "it has been noticed that his bleeding body still has its flexibility as if it were alive”. The Catholic Tradition website says: "Father Joseph Mahfouz, the postulator of the cause, certified that in 1965 the body of Saint Charbel was still preserved intact with no alteration. In 1976, he again witnessed the opening of the grave; this time the body was completely decomposed. Only the skeleton remained."

On 2 September 2017 Saint Charbel's relics were translated to Saint Elisabeth Cathedral in Košice, Slovakia, where a monthly pilgrimage is held, called "Púť k sv. Šarbelovi" (Pilgrimage to St Charbel). The cathedral is the first in Slovakia to receive his official relics from Lebanon, and attracts pilgrims from across the country as well as neighbouring states like Poland, Ukraine and Czech Republic.

On 5 December 1965 Pope Paul VI presided over the beatification of Makhlouf at the conclusion of the Second Vatican Council. The pope said: “A hermit of Mount Lebanon is enrolled in the number of the blessed… a new eminent member of monastic sanctity has by his example and his intercession enriched the entire Christian people … may he make us understand, in a world largely fascinated by wealth and comfort, the paramount value of poverty, penance and asceticism, to liberate the soul in its ascent to God.”

On October 9, 1977, the pontiff canonized Makhlouf. At the time, Bishop Francis Zayek, wrote, “St. Sharbel is called the second St. Anthony of the Desert, the Perfume of Lebanon, the first Confessor of the East to be raised to the Altars according to the actual procedure of the Catholic Church, the honor of our Aramaic Antiochian Church, and the model of spiritual values and renewal. Sharbel is like a Cedar of Lebanon standing in eternal prayer, on top of a mountain.” Reflecting on the canonization of Makhlouf and the causes for canonization of other Maronites active at the time, Zayek further proclaimed “the Aramaic Maronite Antiochian Church is indeed a living branch of the Catholic Church and is intimately connected with the trunk, who is Christ, our Savior, the beginning and the end of all things.”

Owing to his role as a Maronite Saint as well as his piety and morals, Makhlouf serves as a role model for many Maronite Catholics and is venerated by Catholics from all sui iuris churches in communion with Rome.

On October 28, 2017, a shrine dedicated to Makhlouf was inaugurated at Saint Patrick's Cathedral. The Lebanese Maronite Patriarch, Bechara Boutros al-Rahi, attended the inauguration ceremony giving his blessing and a dedication, as well as Cardinal Timothy M. Dolan. The shrine has a mosaic of Makhlouf along with national emblems of Lebanon such as the cedar and a relic of Makhlouf. It was donated by SGBL Bank chairman Antoun Sehnaoui in the name of his parents, May and Nabil Sehnaoui.

Among the many miracles attributed to Makhlouf, the Catholic Church chose two to confirm his beatification, and a third for his canonization:
the healing of Sister Mary Abel Kamari of the Sacred Hearts;
the healing of Iskandar Naim Obeid from Baabdat; and
the healing of Mariam Awad from Hammana.

A great number of other miracles have been attributed to Makhlouf since his death. The most famous is that of Nohad El Shami, a 55-year-old woman at the time of the miracle who was healed from partial paralysis. She tells that on the night of January 22, 1993, she dreamt of two Maronite monks standing next to her bed. One put his hands on her neck and operated on her, relieving her from her pain, while the other held a pillow behind her back. When she awoke, she found two wounds in her neck, one on each side. She was completely healed and recovered her ability to walk. She believed it was the saint who healed her, but did not recognize the other monk. The next night, she dreamt of Makhlouf, who said: "I did the surgery to let people see and return to faith. I ask you to visit the hermitage on the 22nd of every month, and attend Mass regularly for the rest of your life”. People now gather on the 22nd of each month to pray and attend Mass in the hermitage of Saint Charbel in Annaya.

In 1994, a Lebanese Maronite Catholic named Raymond Nader was praying at the hermitage in Annaya when he had a mystical experience. “I found myself in another world…I saw a strange and amazing Light unlike any light I had ever seen; it was a sea of light that extended from one end of the universe to the other. I wanted that Light to stay permanently.” After the vision, Nader was leaving when his arm felt hot and itchy near the statue of Saint Charbel. When he rolled up his sleeve in his car, he saw the imprint of five fingers. “They were engraved like a hand on my arm and encircled by a red glare as if imprinted through fire. But I felt nothing but warmth.”

Dr. Nabil Hokayem, a plastic surgeon from Beirut, examined the mark and believed it was a third-degree burn despite not causing Nader pain. The mark has since repeatedly faded and returned. Inspired by his experience, in 1995 Nader began a prayer group called the Family of Saint Sharbel. Its mission is “to contribute to the Catholic Church’s evangelizing mission through living the spirituality of Saint Sharbel in the world.” Nader claims Saint Charbel has appeared to him many more times, and 16 of the saint's locutions to Nader have been published.