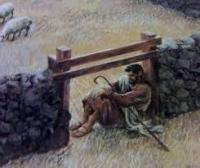 In today’s gospel, Jesus describes himself not only as a shepherd but as the gate of the sheepfold. Gates are powerful symbols. The Romans actually had a god of gateways, Janus. In the past, cities often had gates as a protection. It was also apparently the custom for the shepherd to sleep crouched at the entrance of the sheepfold. This can be seen as an image of the Church, which is guarded by its gate, Jesus. It is a picture of a community which is stronger when it stays together, but in which each member is known individually, as sheep are known by their shepherd. In his prologue John has already described Jesus as the Word of God, who provides the gateway into life. The Pharisees have proved to be false shepherds, who disregard the gate and are not interested in pasturing the flock. Self-interest prevents them from recognising both the shepherd and the gateway so that they become like the wolves, whose whole aim is to devour the sheep.

In chapter 21 of the gospel of John, Jesus commands Peter to feed his sheep (John 21.15-18). The emphasis is on nourishment. At this time of crisis, of illness, death of loved ones, loss of jobs and loneliness, Jesus the Word still feeds us through the scriptures in our daily liturgies, even though we cannot receive him sacramentally.