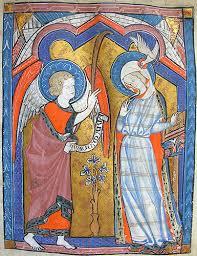 Today we light the fourth candle on the Advent wreath. This is the angel candle or the candle of love. Our waiting is almost over as we reflect on Gabriel’s appearance to Mary. The Annunciation was a popular subject with artists. Mary is almost always depicted at prayer or with a book. In an article, Ben Kimmerling suggested that for a long time she had the sense that God was going to ask something very special from her. Yet when the angel Gabriel appeared she seems to have been to be frightened. If she was familiar with the Book of Daniel, she might have experienced the same reaction as the prophet, when Gabriel appeared to him. However when the angel told her what God needed from her, Mary accepted without hesitation. She was risking being stoned to death for being pregnant outside marriage and jeopardising her relationship with Joseph, to whom she was betrothed. That for any young woman would have been very distressing However Mary put her whole trust in God, leaving everything to him. In her came the fruition of all that was best in the Jewish people, who had been specially chosen by God.

The words of her son to the woman in the crowd, who called his mother blessed, would most especially apply to her. She treasured the Word of God so much that, by the power of the Holy Spirit, she conceived this, the second person of the Trinity, as a living being.

Moder and mayden
Was neuer non but che
Wel may swych a lady
Godes mother be.

Mother and maiden
there was never, ever one but she;
Well may such a lady
God’s mother be.