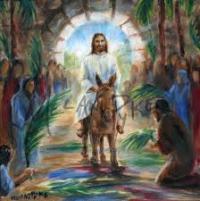 The first followers of Jesus were simple, probably uneducated, people. They accepted Jesus in a way that the Jewish leaders did not. St Paul discovered that he could not preach the Good News by clever arguments but only by proclaiming Christ crucified, for his throne was the cross. However there were Jewish rulers like Nicodemus, who was humble enough to listen to what Jesus had to say, and as a result Jesus had the opportunity to speak some of the most beautiful words in the New Testament.

When he appeared before Pilate, he told him that his kingdom was not of this world. The Roman governor, like many other politicians then and now, was not capable of understanding that kind of dominion. Jesus was not interested in power for its own sake but only for the good of his subjects. He called himself the Good Shepherd who cares for his sheep and gives his life for them. The prophet Zechariah spoke of Jerusalem's king coming on a donkey, which is not the image expected of a king; but it’s what Jesus did.

Jesus calls his people to come to him, for unlike other monarchs, he is available to all and has no favourites. At this time, when so many people are burdened with anxiety and uncertainty, his invitation has all the more meaning.

“The Lord supports all who fall
and raises all who are bowed down.” (psalm 144)