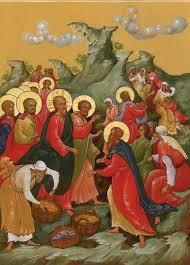 The miracle in today’s gospel is the only one mentioned by all four evangelists. It is a stark contrast to the banquet held for Herod’s birthday, with the simple but nourishing food Jesus gave to the people. Herod’s feast occurred against a background of spite and vengeance, which led to the death of John, whereas the feeding of the five thousand came as an act of unselfishness and compassion. Jesus wanted to be alone to mourn the death of the man who had foretold his coming and who was also his relative. In Mark and Luke’s accounts, the apostles had just returned from their mission and needed a rest. Nevertheless he attended to the needs of the crowd who had come from afar to listen to him.

The synoptic gospels recount the event as a story of Jesus making a little go a long way as Elisha had done (2 Kings 4:42. ) John, however, uses it as a link with the teaching on the eucharist. It is the only account which tells of the boy who offered to share his food. His action is symbolic of the message Jesus was trying to impart. He was attempting to move the people from thinking about their bodily appetites to an understanding of spiritual food which is lasting and fruitful. He was preparing them for the offering of himself in total self-giving on Calvary, from where the feeding of the multitude would continue for all time.